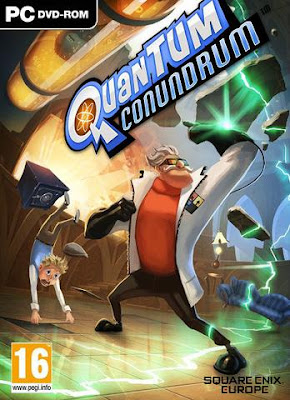 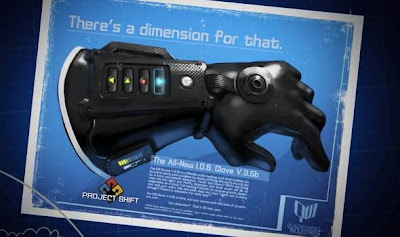 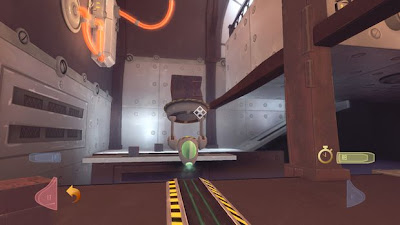 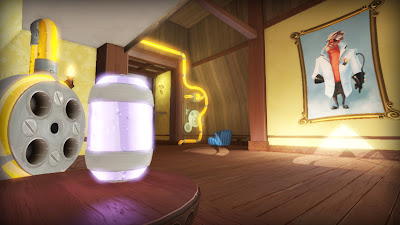 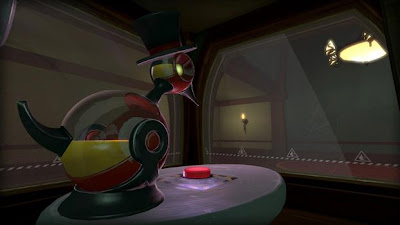 
In the first-person puzzle platformer Quantum Conundrum , players must use the unusual ability to shift dimensions to navigate the twisting corridors of Quadwrangle Manor. Players take on the role of a young kid dropped off on his uncle’s doorstep for the weekend; his uncle just so happens to be the brilliant, eccentric inventor, Professor Fitz Quadwrangle. Upon entering the Professor’s vast manor home retrofitted with crazy technology to test his latest hypotheses, players quickly realize their uncle has gone missing. Fortunately, players soon gain access to Professor Quadwrangle’s latest invention, the Inter-Dimensional Shift Device, which, at the press of a button, will shift the world around them to an entirely new dimension. In order to find him, players must use the newly found IDS Device to dynamically change the world to and from a variety of different dimensions to progress through the complicated Quadwrangle Manor. While on the journey, becoming adept at utilizing the various dimensions will help them trek from one bizarre and challenging room to the next. It might sound easy enough, but it is a tall order for a kid in a giant puzzle of a manor!


Features:
Engaging Puzzle Gameplay: Using the Inter-Dimensional Shift Device, players will shift to and from various dimensions to manipulate the world around them and clear levels with increasing degrees of difficulty.
Experience New Dimensions: Each dimension the player gains access to becomes a valuable asset to manipulate objects in the manor in a specific way. For example, the Fluffy Dimension makes heavy objects ten times lighter, enabling players to move what was once an immovable safe from one place to the next.
Immersive, Interactive Environment: In addition to the various dimensions allowing the player to learn new skills and techniques, the look and feel of each dimension is completely distinct. When shifting to the Fluffy Dimension, everything in the room becomes soft and plushy like a cuddly version of its previous state. Every dimension carries its own atmosphere, letting the player feel like they are truly in the world.
Unique Art Style and Humor: The Professor’s manor and all the items within it have a unique style, but that’s not all. Players should be on the lookout for humorous touches and jokes scattered throughout the manor home. Who wouldn’t want to know what the infamous Professor Quadwrangle looks like in the Fluffy Dimension?