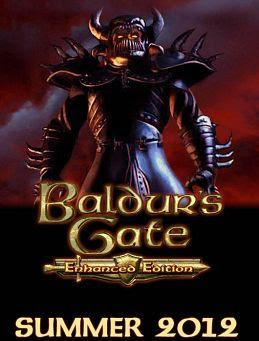 
Publisher: Atari
Developer: Overhaul Games, Beamdog
Genre: RPG
Release Description:
Developed by Overhaul Games, Baldur’s Gate — Enhanced Edition revives this classic RPG game originally produced by acclaimed studio Bioware. Baldur’s Gate takes you back to the Forgotten Realms campaign setting in a dazzling role-playing adventure, one that brings to life the grand tradition of the Advanced Dungeons & Dragons game through intricately designed graphics, sound and play balancing. Immerse yourself in this quintessential medieval fantasy world, where nations hang in the balance of your actions, dark prophesies test your resolve, and heroic dreams can be fulfilled at last.
Relive this saga or experience it for the first time in a re-forged version of the Infinity Engine, with a variety of modern improvements. Baldur’s Gate: Enhanced Edition includes the entire Baldur’s Gate adventure as well as the Tales of the Sword Coast expansion pack. And for the first time, players can experience never-before-seen content including a new adventure and new party member added to the Enhanced Edition.
Features:
Re-forged by Overhaul Games — A dedicated team has been assembled for this release of Baldur’s Gate to enhance this timeless classic. To remain true to the spirit of the game, the team includes original Baldur’s Gate development staffers.
Gripping non-linear adventure play spans seven chapters, with dozeons of subplots that branch in and out of the main scenario. Your decisions affect subsequent chapters and the entire game world as a while.
Set in TSR’s best-selling Forgotten Realms campaign setting, the most popular and longest-running of the AD&D role-playing game worlds
Posted by Dream Games at 10:14 PM
Posted by GamerSolution at 11:30 PM