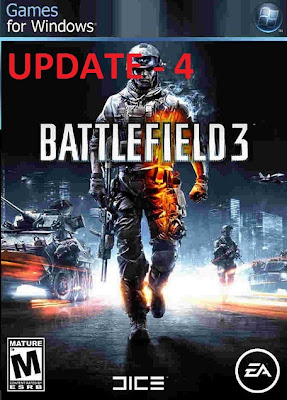 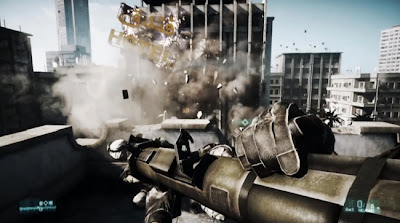 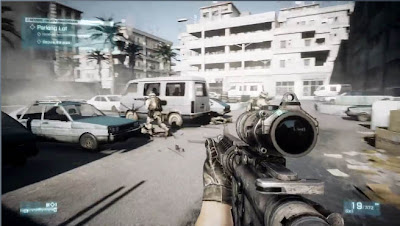 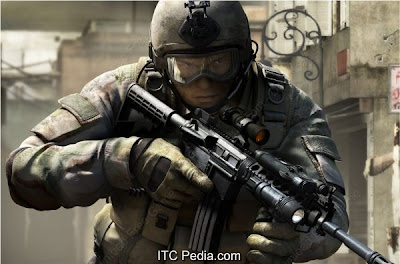 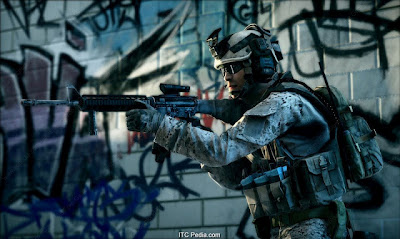 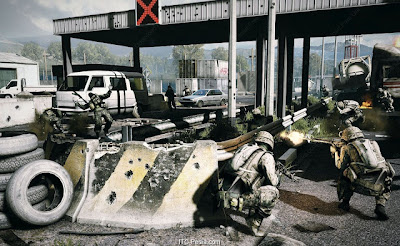 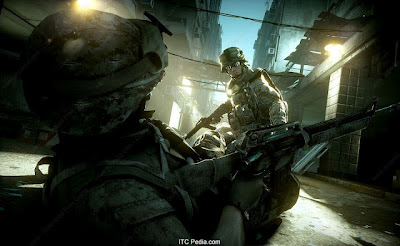 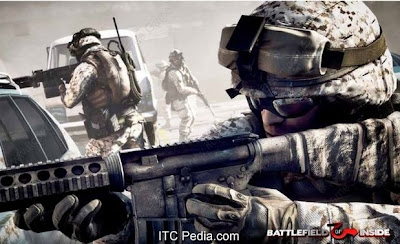 Battlefield 3 leaps ahead of its time with the power of Frostbite 2, the next instalment of DICE's cutting-edge game engine. This state-of-the-art technology is the foundation on which Battlefield 3 is built, delivering enhanced visual quality, a grand sense of scale, massive destruction dynamic audio and incredibly lifelike character animations. As bullets whiz
by, walls crumble, and explosions throw you to the ground, the battlefield feels more alive and interactive than ever before. In Battlefield 3 players step into the role of the elite U.S. Marines where they will experience heart-pounding missions across diverse locations including Paris Tehran and New York

Frostbite 2 Battlefield 3 introduces Frostbite 2, the incredible technology that takes animation, destruction, lighting, scale and audio to new heights. Built upon this powerful game engine, Battlefield 3 immerses players physically and emotionally to the world around them like never before

Feel the Battle Feel the impact of bullets and explosions, drag your fallen comrades into safety, and mount your weapon on almost any part of the terrain. Battlefield 3's cutting edge animation, spectacular visuals and real as hell battle gameplay attack your senses and make you feel the visceral warrior's experience like no other FPS

Unparalleled Vehicle Warfare The best online vehicle warfare experience gets even better with a fitting sonic boom as fighter jets headline an impressive lineup of land, air and sea vehicles. Other returning fan favourite features include 64 players for PC and prone

Urban Combat Take the fight to iconic and unexpected places in the USA Middle East, and Europe including claustrophobic streets, metropolitan downtowns, and open, vehicle-friendly landscapes as you fight your way through the war of tomorrow

-Players should no longer take fall damage from short falls.
-Players now get up from Prone slightly faster, allowing better odds of getting away from a grenade or threat when prone.
-Fixed some situations that would unintentionally make a player unrevivable.
-Reduced the black screen fade in time on spawn. The fade is still necessary for properly streaming in loading content at spawn, but it has been substantially reduced.
-Increased the spawn protection time from 1sec to 2sec. The protection will still be immediately canceled as soon as the player moves or shoots.
-Spawn protection will no longer be canceled by the player looking around.
-Increased the speed at which a player regains accuracy when aiming after moving for a more responsive experience. Firing before fully zoomed will still result inaccurate fire.
-Increased the inaccuracy and recoil added when a player is fully suppressed.
-Shotgun Buck and Flechette rounds now have a less suppressive effect at medium to long range.
-Tweaked the damage levels of Buck and Flechette rounds to balance them with other weapons.
-Improved the suppression of the .44 magnum, .357 magnum, and the 5.8x42mm DAP88 rounds from the Type88 sniper.
-Attempting to Crouch (like Prone) will now properly interrupt Sprint.
-Increased the effectiveness of Suppression Resist Specialization.
-Parachutes now respond to turn and throttle inputs more quickly.
-Switching from primary weapons to sidearms and back now takes less time.
-Increased the effectiveness of explosive resistance.
-Tweaked bipod deploy settings so players can no longer deploy a bipod in places higher than chin level.
-The bipod should now be more reliable when deploying on top of sloped objects like cars and rocks.
-Fixed several issues with vaulting objects, especially for thin railings.
-The Knife now only takes two swipes to kill when attacking from a position where a takedown is not possible.
-CRAM weapons on Carriers now count towards stationary weapon awards.

- Having the same map occur multiple times in the maplist now works properly
- If adding a new map to the servers maplist after a clear and then running âˆœmapList.runNextRoundâˆ the server will ignore any remaining rounds on the map that it still run since before the clear and move to the new first map in the list. The server will now have reset the current rounds per map and run the map in the list for the number of rounds stated when adding the map.
- Maplist can contain up to 1000 entries now
- mapList.list will return at most 100 entries. To get the entire list, perform mapList.list repeatedly with increasing offsets (like banList.list)

-Fixed the 7x scope not zooming to the full 7x on all weapons.
-Corrected the M39âˆ²s laser sight so it points at the point of impact and aligns with scopes when zoomed.
-Fixed a misaligned scope crosshair on the G3A3 using the Rifle Scope 6x.
-Fixed the PKA and PKA-S scopes on the M416 having swapped zoom levels.
-The L96 Straight Pull bolt now functions properly.
-The L96 ironsights have been adjusted for a clearer aiming picture and correct use of the integral front sight.
-The L96 now properly shows scope glint when using the 8x, and 12x scopes.
-Tweaked IRNV to be more consistent across all levels.
-Fixed a rendering issue with IRNV view when taking damage.
-Tweaked the IRNV zoom times and scope visible areas to be the same across all weapons (some were faster than others).
-Fixed the QBU-88 sniper and the L96 IRNV scopes to use the proper sniper reticule

-The Accuracy increase and Recoil reduction of the Bipod has been significantly improved for Assault Rifles and Carbines.
-The Bipod now provides similar Accuracy and Recoil benefits no matter if the weapon is fired while aiming or without aiming for all weapons. Previously only LMGs were worked this way. This especially improves the speed at which snipers can make follow up shots, and also allows effective unaimed suppressive fire with Assault Rifles and Carbines.
-Increased the Speed at which a bipod is deployed, allowing the user to obtain the bipodâˆ™s bonus sooner after the deploy has started and allowing the weapon to be aimed in a far shorter time. The speed has been increased 40-50%, depending on the weapon and animation.

-Tweaked IRNV to be more consistent across all levels.
-Fixed a rendering issue with IRNV view when taking damage.
-Tweaked the IRNV zoom times and scope visible areas to be the same across all weapons (some were faster than others).
-Fixed the QBU-88 sniper and the L96 IRNV scopes to use the proper sniper reticule.

-The Horizontal Sway reduction has been changed from a global percent reduction to a weapon specific value reduction. For most guns this means very little change, for guns which have a large horizontal recoil the change is more substation. The FAMAS, F2000, and AEK971 are most effected, the AK-74, M16, and M416 are nearly unchanged.
-A small long range Aimed Accuracy penalty has been added to the foregrip. Players who generally find themselves fighting at mid to long range may want to change their accessory, while players fighting in CQB will go largely unaffected. Combining the Foregrip with a Silencer or a Heavy Barrel will offset this penalty.

-The Hip Accuracy bonus provided by the Laser Sight has been increased. Some PDWs have had their crouch and prone base stats adjusted to prevent hip firing being more accurate than aimed fire when using a laser sight.
-The bonus is now a weapon specific value instead of a global percentage, some guns receive larger or smaller bonuses, though all bonuses are better than they were previously.

-The Suppressor no longer reduces the maximum damage of a weapon when equipped. Instead the Suppressor reduces the minimum and maximum range of the weapon, making it ideal for CQB and Stealth. This change will make the Suppressor slightly more effective at long range, where the bullet drop and speed makes shots difficult already, and reduces the power of the suppressor at mid range slightly.
-The Suppressorâˆ™s recoil bonus remains unchanged at a global 10% decrease. This is less than the Flash Suppressorâˆ™s bonus for all weapons.
-The Hip Accuracy penalty of the Suppressor has been changed from a global percentage to a per weapon value. Generally this penalty is higher now, but not for all weapons. Specifically, the belt LMGs and bolt Snipers do not have any additional hip fire penalty, as their penalty is already at the maximum possible value.
-Reduced the Aimed Accuracy bonus of the Suppressor from 50% to 25%. A Suppressor and Foregrip combo will have similar accuracy to a weapon without any Accessories, at the penalty of worse Hip Fire Accuracy and Range and with the benefit of much improved Stealth and reduced Recoil.

-Reduced the spot times on C4 and Claymore projectiles from 30 to 15 sec.
-Tweaked the controls and physics for the EOD bot to improve its handling and aiming capabilities.
-The Radio Beacon, Mortar, MAV, EOD bot, T-UGS, and SOFLAM should now be much easier to deploy.
-The MAV will now be destroyed when running into a soldier or vehicle at high speed. It is still possible to strategically sacrifice your MAV on a soldier; it will be destroyed in the process.
-The MAV now properly shows up in the Kill Feed. Previously it simply displayed âˆœKILLED.âˆ
-The MAV can no longer be used as an elevator.
-Matched the motion sensor sweep frequency and range on the MAV to the TUGS.
-Players will no longer auto enter SOFLAM, MAV, and EOD bots after they are deployed.
-Players may now use their knife to destroy enemy equipment.
-C4 will no longer be detonable after a player respawns, if the player is revived within 5 seconds he can still detonate his C4.
-The player may now have a maximum number of mines which will persist after the playerâˆ™s death. Deploying more than the maximum of 6 mines will remove a previous mine from the world.
-Claymores now live up to 5 seconds after a player dies, the player can have a max 2 claymores planted at the same time.
-Claymores can now detonate from vehicles and can be used to disable jeeps or kill the passengers in light jeeps. Claymores will not do any damage to heavy vehicles.
-Ammobags now stay until the user redeploys them like Medkits.
-Ammobags resupply bullets more quickly, but explosives resupply more slowly, especially 40mm grenades.
-Slightly reduced the effective blast radius of the RPG, SMAW, and 40mm grenade projectiles against infantry.
-Reduced the total number of RPG and SMAW missiles carried from 5 to 4. Players desiring more rockets will want to use the Explosive spec.
-Slightly increased the heal rate of the Medical Crate.
-The MAV now will also descend by pressing the Crouch Toggle key. (PC)
-The M224 Mortar can no longer be deployed in an area that is out of combat for another team like a home base or other protected spawn.
-Tweaked M224 exit points so the player faces in the direction of the mortar when he exits.
-Mines, Claymores, C4 and other deployable items will now only appear on the minimap when spotted by a teammate.

As has been rumored for some time, we are making some improvements to the commo-rose on PC. This is partially based on feedback from the community.

Please be aware that the commo-rose will change depending on your current position âˆ“ vehicles and infantry each have separate call outs. Each function should trigger appropriate voice messages as well as icons on the mini map.

Each button should trigger appropriate voice messages as well as icons on the mini map. Players should keep an eye on the mini map for these icons that will flash when a team mate is requesting aid via the commo-rose.

We are also adjusting the level of detail to give a clearer picture for players when using the mini-map.
The three new mini map modes are: Satellite, Hybrid & Detailed.
Posted by GamerSolution at 1:49 AM